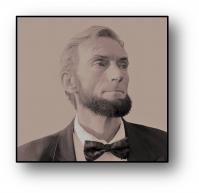 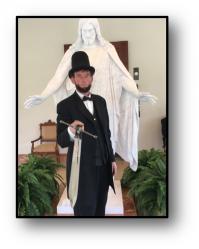 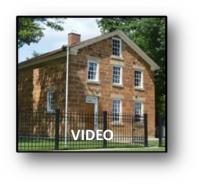 " Abraham Lincoln was a man of destiny, perhaps the only man under heaven who could have saved the Union."  His words and warning for his day are chilling, when applied to a divided America today.
Abe Lincoln was a man of deep thought and clever wit. You will laugh and love Abe Lincoln, as you witness the funny side of one of America`s greatest presidents.

Joseph Smith was an advocate of the Constitution, believing it to be inspired from Heaven.  As a candidate for Presidency of the United States, his platform included the sale of public lands to purchase freedom for the slaves.  There is a little known connection between Abraham Lincoln and the Prophet Joseph Smith that later influenced national events.


"I Witnessed the Martyrdom at Carthage"
Act II
The Testimony of Willard Richards
Willard Richards was the personal secretary of the Prophet Joseph Smith and was with him in the final days before his death.  Because he was an eyewitness, record keeper and a dear friend to the Prophet, he was in a unique position to tell the story of the martyrdom.
This is his story.  Re-enacted by James Kroshus
___________________________
- Reviews -
"Absolutely Outstanding ... moving beyond description!"
Robert Trimble, Reno, NV
"It was awesome!"
Ken Lynn, Carson City, NV
"The most inspiring presentation of my life!"
Melanie Snapp, Dover, Delaware
_________________________
Due to the nature of this production this presentation is not suitable for little children, please no infants in arms. Any children should be able to sit quietly for at least one full hour. There will be a brief intermission between act one and act two.